An activist locked-onto the base of a tree at Decoy Pond Camp is removed by security. 28-01-2013. Photo: Adrian Arbib

Can you come tonight to climb into site and help defend the trees tomorrow? Transport from Brighton, Lewes, Bexhill & Hastings. Details 07766 335506
—————————————
The eviction of the third camp (Decoy Pond Camp – see here for maps and directions) along the route of the Bexhill-Hastings Link Road (BHLR) began around 8.40am this morning. As at t 12.30pm there were some 70+ security personnnel on the site, as well as a considerable number of activists lock-on up the trees – including at least one at the top of a fifty-foot tree. The first arrest was reported around 12.20pm.

As we noted at the time of the eviction of “Base Camp”: This is only the end of the beginning for the protests against the Bexhill Hastings Link Road (BHLR)!
If you can’t make it down to the Valley this week then please sign the Pledge / like us on Facebook / follow us on Twitter (@combe_haven) / send a donation (use the PayPal buttons on this site or send a cheque) and stay posted for news on Phase 2! 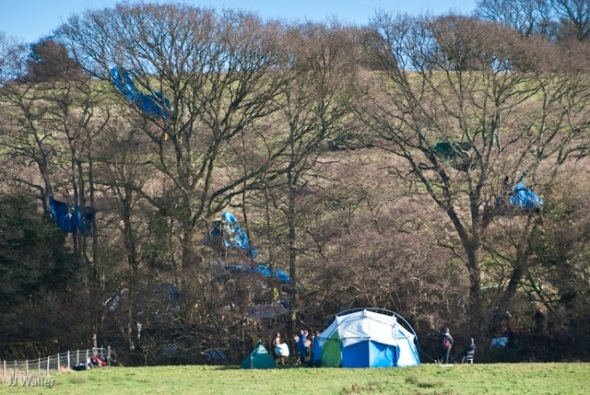 Decoy Pond Camp prior to the eviction. Photo: JJ Waller

28 January, 9.45am: The eviction of the third [2] anti-road camp along the route of the proposed Bexhill-Hastings Link Road (BHLR) has begun this morning, Monday 28 January. Campaigners are  currently peacefully resisting the eviction of the Camp, which is located just west of Upper Wilting Farm in Crowhurst (TN38 8EG), locked-on up trees and down tunnels [3].

The peaceful protests against the Road– which have been running since 14 December, with 19 arrests – have seized national attention over the past month [4].

Yesterday, directors and senior campaigners from six major environmental and transport NGOs, including the RSPB, Greenpeace and the Campaign to Protect Rural England, visited the Camp, condemning the £100m Road project [5], one of over forty “zombie roads” that were declared dead years ago but have now been resuscitated as part of as part of Britain’s largest road-building programme in 25 years [6, 7].

Andy Atkins, Executive Director, Friends of the Earth, said “’This road shouldn’’t have been approved. It will lead to more pollution, damage the environment and do little to boost the local economy. Reviving discredited road schemes like this won’t solve our economic and transport problems, it will simply shift traffic elsewhere. Transport policy must change direction. We need cleaner cars and safe, efficient and affordable alternatives.’” [5]

Adrian Hopkins of the Combe Haven Defenders said: “Resistance has been growing to this awful scheme as each day passes and more people become inspired by the action so far taken to protect the beautiful Combe Haven valley. This is only the beginning of a sustained campaign of peaceful resistance to this environmentally disastrous white-elephant project.”