Act now to save Hollington Valley SNCI from being destroyed to make way for yet another business park.

Sea Change Sussex is moving ahead rapidly with its plans to destroy more and more of our green spaces in the name of ‘regeneration’ (see report below).

One of Sea Change’s proposed sites – ‘Queensway/Ridge West’ – has not yet been destroyed.  Please help save this site by doing the following:

Please tweet, email, facebook message, phone or write to them (sample letter at end).  Please let us know if you have any response.

Bluebell wood in Hollington Valley. In recent weeks many of the trees have been marked with blue spots

Queensway/Ridge West is Sea Change’s name for an area of open land and woodland (the Hollington Valley Site of Nature Conservation Importance) to the west of Sedlescombe Road north (behind Sainsbury’s).  This is the proposed site of the Baldslow Link (another road being pushed by Combe Haven destroyer and ex-county council leader, Peter Jones, this time in his capacity as chair of the South East Local Enterprise Partnership), and Sea Change’s ‘Queensway Gateway’ development.

The proposal is to ‘develop’ (that is to say, build yet another ‘business park’ on) four hectares of this land, surrounding the new road. All the land earmarked for the road and associated business development is open, wooded, green space.

In breach of the Local Plan?

According to the Hastings Borough Council local plan:

Sites of Nature Conservation Importance represent valuable
wildlife areas within the built environment. They contribute to the
green network of wildlife sites and a quality natural environment
in the Borough.

Policy NC6 of the plan (page 126 of this document) states that:

Development proposals within or adjacent to Sites of Nature
Conservation Importance will not be permitted unless there is a
local need which outweighs any harm to the nature conservation
interest.

Sea Change has recently built, or is soon to build, ‘business parks’ at Queensway South, Queensway North (see below) and North East Bexhill.  The development at Queensway South (aka Enviro 21) was almost empty for at least two years after it was built, and eventually went into receivership. Does this suggest that there is such a pressing ‘local need’ that the protection afforded to SNCIs in the town can be ignored? 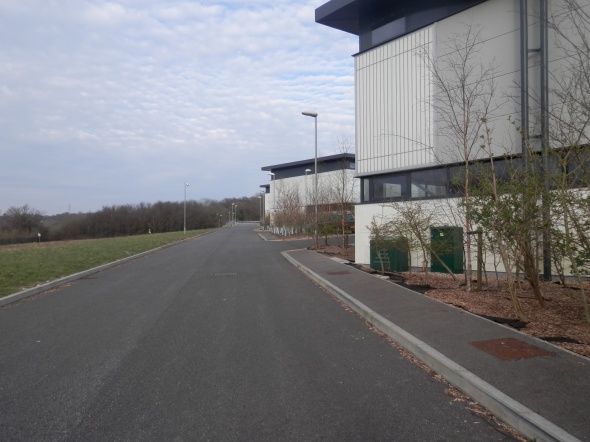 Meanwhile, the area earmarked for Sea Change’s  ‘Queensway North‘ development – an area of open space and woodland off Queensway, adjacent to the ancient woodland and SSSI of Marline Woods – has in recent weeks been utterly destroyed.

According to a 2007 Environmental Statement (here and here), the woodland was ‘nationally important’, and ‘indistinguishable in ecological character to adjoining off-site woodland areas located to the west and north [Marline Wood] that are designated as both ancient woodland and SSSI’. In addition, the report identifies a large population of dormice, roosting bats, 43 species of birds including several on the red list (globally threatened), and “exceptional” breeding populations of both slow-worm and common lizard. (You can see the full report here: go to ‘appendix B, ecology and nature’).

But now all this has gone: the site has been devastated as contractors have felled trees in order to make way for yet another business park:

Do we need more and more speculative development? Is this a good use of public money?  Will it create the promised jobs?  What happens if it goes belly up?  Why is our green space considered worthless except as a site for soulless ‘development’?  Why is Sea Change- with two publicly funded projects already in receivership (Lacuna Place and Enviro 21)- entrusted with ever more projects?

These are all questions to ask your councillors, both county and borough.  Please write, email, ring, tweet, facebook message, buttonhole them in the street NOW!  Sample letter below:

Dear ….
I am concerned about the proposed Sea Change development at Queensway/Ridge West, behind Sainsbury’s.  This is one of the few wild green spaces we have left, and is a designated Site of Natural Conservation Importance (Hollington Valley SNCI).  However, Sea Change plans to turn it into another ‘business park’.  I believe this is in direct contravention of policy NC6 of the Hastings Local Plan, which states that ‘Development proposals within or adjacent to Sites of Nature Conservation Importance will not be permitted unless there is a local need which outweighs any harm to the nature conservation interest.’

Sea Change has recently built, or is planning to build, business parks at Queensway South, Queensway North and North East Bexhill.  Queensway South went into receivership because tenants could not be found.  I do not accept that the ‘local need’ for more such development, is such that the Hollington Valley SNCI should be permitted to be destroyed.

Further, I do not think Sea Change is in any case a suitable company to be entrusted with such a project, since two of its projects (Lacuna Place and Queensway South/Enviro 21) are already in receivership.

In recent weeks another Sea Change project (Queensway North) has caused irreparable damage to a large area of ancient woodland, rich in protected species.  I would ask you to speak out to save the Queensway/Ridge West site from the same fate.  I would be grateful if you could let me know your view on this potential development.

Sherlock Holmes and Miss Marple search for secret HS2 documents at Hastings rail summit »
« Greg Barker MP: On the make & off the record