You Must Be Choking! Campaigners turn out in the rain to say NO to the Queensway Gateway road 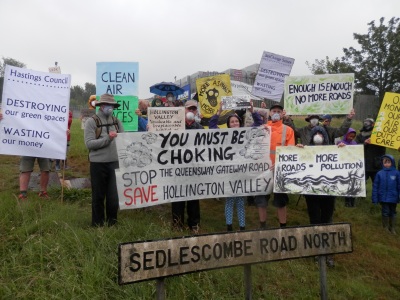 Heavy rain was not enough to put off the hardy band of campaigners who gathered today to highlight the issue of the air pollution which would be caused if the Queensway Gateway road were built.  We gathered with our banners and masks to say NO to the Queensway Gateway road: no to more air pollution; no to increased carbon emissions; no to the destruction of Hollington Valley; and no to yet another of SeaChange’s wasteful projects paid for with public money. 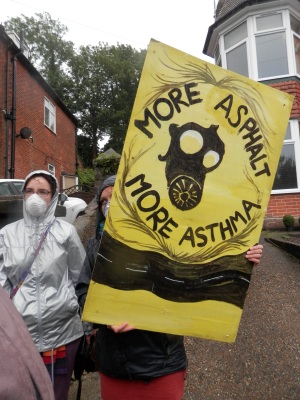 SeaChange’s own figures show that air pollution limits would be breached at a number of residential properties near the new road, including on Sedlescombe Road North (the A21) near the Ridge. These breaches of the law on air pollution were the reason that Hastings Council finally agreed – after holding out for almost four months – to quash the planning application for the road.

SeaChange has stated that a new application will be considered by Hastings Council ‘in the near future’, but have given no indication as to how they will get around the issue of air pollution.  Hastings Council presented the issue as simply a procedural one – ie that they neglected to inform the planning committee about the air pollution issue.  In fact, it is a material consideration – that is, one that has to be taken into account by the planning committee.  They cannot, as Hastings council seems to be suggesting, simply acknowledge the problem and then ignore it. 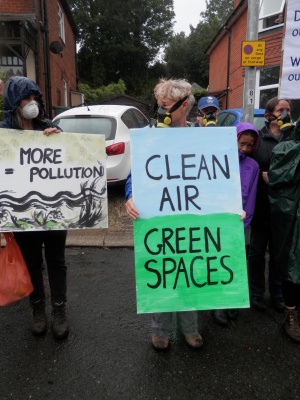 In an important recent ruling, the Supreme Court ordered the UK government to take ‘immediate action’ on air pollution.  The case was brought by activist law firm Client Earth, who said : “Air pollution kills tens of thousands of people in this country every year. We brought our case because we have a right to breathe clean air and today the Supreme Court has upheld that right.”

Hastings Council must also pay due regard to this ruling: they cannot simply pass the planning application again.  We wait to see what happens next…

(with thanks to the banner makers, the cake makers, the tea makers, and of course, all those people who turned out in the rain.  Watch this space for the next event!)