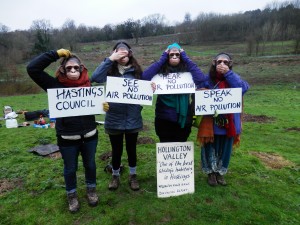 The Queensway Gateway road was originally granted planning permission in February 2015 [3], but the permission was quashed after a local resident brought a successful legal challenge [4], citing breaches of national and EU legislation on air quality.

The applicant, local regeneration company SeaChange Sussex, subsequently adjusted the traffic figures for the road in order to be able to claim that the air pollution at human receptors was lawful. However, the applicant’s own documents showed that the road would still breach the critical levels set down for the protection of vegetation [5]. The officer in charge of the case recommended allowing the application, despite acknowledging that it would breach air pollution critical levels as well as being ‘in conflict’ with four HBC policies on biodiversity and green spaces [6].

Campaigners sent their message from Hollington Valley, the local wildlife site which would be destroyed by the Queensway Gateway road. The road would bring 24,000 vehicles a day through the site, described in its designation report as ‘invaluable and irreplaceable’.

Emily Johns, spokesperson for Combe Haven Defenders, said “Most of the councillors on the planning committee chose to not to see, hear or speak about the very serious issue of air pollution which would be caused by the Queensway Gateway road. This is exactly what got the Council into trouble last time they passed the application. Hastings Council should not allow SeaChange to pull the wool over its eyes about this destructive and polluting road, and we would urge them to quash the planning permission immediately.”

Join us on 21 January to say NO to the North Bexhill Access Road »
« Drawn to Witness: New Year drawing event, Hollington Valley