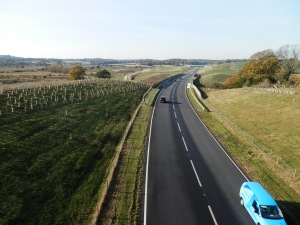 Documents presented to East Sussex County Council’s (ESCC) Cabinet show that the cost of the Bexhill Hastings Link Road (BHLR) has risen for the fifth time since the project started. Costs have increased by £1.3m, bringing the current total cost for the road to almost £125.6m [2]. The Council Monitoring Report also warns that ‘there is risk of further cost overruns’.

The latest increase brings the total cost increase since construction began to £26.6m and means that the contribution from ESCC towards the road, originally £30m, has now gone up to £68.75m – an increase of almost 130% [7]. No reason is given in the report for the additional costs.

When funding for the BHLR was agreed by the Department for Transport (DfT) in 2012, the road was assessed as ‘low/medium’ value for money. In its analysis, the DfT stated that ESCC had ‘significantly overstate[d]’ the likely jobs and economic benefits to flow from the scheme [8].

Combe Haven Defenders spokesperson Anthony Bradnum said, ‘It is alarming that a year after the Bexhill Hastings Link road opened, costs are continuing to rise, with the risk of further increases to come. We believe there is a strong case to be made that ESCC underplayed the costs when bidding for money from the DfT, in order to secure funding. Had the likely real cost been revealed at that point, the road would have been such poor value for money that the DfT would not even have considered funding it, and Combe Haven would have been saved for future generations to enjoy. As it is, we have a road which is a disaster for the environment and locks people even more firmly into car driving, at a time when public bodies should be doing everything they can to encourage people to use public transport. Our hope is that lessons have been learnt from this disastrous project, and that no more destructive vanity projects are given the go-ahead locally.’