East Sussex County Council Gateway 4 Review of the link road: what the unredacted version tells us

Link Road September 2014: the least of the risk problems

Last July, we made a Freedom of Information (FoI) request for an East Sussex County Council (ESCC) document from March 2015 about the progress of the Bexhill Hastings Link Road, known as the Gateway 4 Review.

The council stalled for months, then finally gave us the report in a very heavily redacted version, claiming that to release the document would ‘undermine the council’s ability to achieve best value’.

We put in a request for an internal review of the decision not to provide the document in full: the response was to unredact six words in the fifteen page document. We were allowed to see the words ‘£10m Corporate Risk Management Resource Contingency’ after we pointed out that this information (which related to ESCC establishing a contingency fund for risks including the Link Road) was already in the public domain, being in the minutes of a Cabinet meeting. Other than that, the document remained secret.

Watch out for your HTMLs…

After the internal review, the document (now with six more words for us to read) was placed by ESCC on the very excellent ‘What Do They Know’ website (through which one can make FoI requests to public bodies, which are then available to anyone to see, rather than just the person who’s made the request). It was in two formats – a downloadable PDF and an online HTML. We looked at the PDF version, which was of course redacted. A few days ago we happened to look at the HTML version, and discovered that it was entirely unredacted – presumably the redactions were stripped off automatically (and unnoticed by ESCC) when it was uploaded to the web.

So now we can see what ESCC didn’t want us to know, and it makes for some interesting reading. Here are the key points:

The project was late, over cost, and poor quality

The report states that:

‘…the project faces major risks and issues in terms of being behind schedule, over on cost, with concerns about the quality of construction and a number of significant compensation events’.

It goes on to note that although overall costs have increased ‘significantly’, there is a likelihood of further, potentially ‘substantial’, cost increases. The ‘compensation events’ (ie the extra that has to be paid to contractors because of unexpected costs arising during construction) appear to be significant, with a difference between what ESCC wanted to pay, and what the contractors were asking for, of £13m. In addition, the report notes that:

‘ESCC will also have costs to meet for further compensation events management and adjudication, should this arise…The scale of any further cost and funding increase is likely to be signficant’.

The entire section on ‘stakeholder communications’ was redacted. Whilst ESCC claimed that releasing the document would ‘compromise the Council’s competitive advantage’, it is hard to see how this would be the case with the issue of communications strategy. 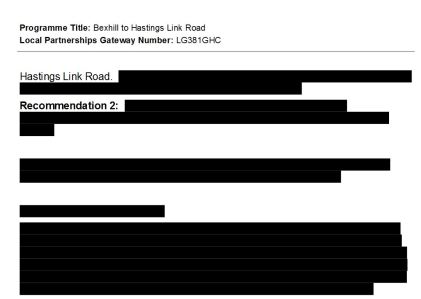 What ESCC wanted us to know about stakeholder communication

The report is very critical here, pointing out that:

‘…there does not appear to be a detailed communications strategy which links across to the commercial risks the project faces and the current uncertainties in likely outcome and road opening dates’.

It concludes that the project is causing an ‘increasing potential reputational risk’ to ESCC.

Failings of the contractor

‘The track record of the contractor to date is that it has not met expectations and there have been a significant number of concerns around the number of structures still to be finished, the quality of the work completed, the extent of remedial works required, the organisation and management of the [joint venture] and its sub-contractors, the acccuracy of programming, and their ability to keep to time in the operational delivery of the programme’.

‘The road should not be opened’
The report was written some months before the road was actually opened in December 2015, and at a time when the opening date was still unclear, but the suggestion was that it would be towards the end of 2015 (having been pushed back from the original planned completion date of May 2015).

However, what was clear at the time was that the landscaping would not be completed until Spring 2016. This posed a problem: one of the planning conditions for the road was that it should not be opened until the landscaping and other parts of the scheme, including building the Greenway, had been completed. But the priority for ESCC was to get the road open as quickly as possible, and this posed a dilemma. The report states that:

‘From a contractual perspective the scheme is not finished and the road should not be opened. It is currently not clear how this is to be managed, but clearly is one of the commercial issues which impact on cost and timetable and the public’s perception and demand to see the road open when it is finished’.

The answer? No, not to push back the opening date until the planning conditions had been fulfilled, but to move the goalposts.

‘It is quite possible that a number of [planning conditions] will have to be negotiated out, waived or reassigned at the point of road opening. The project team have been working with planning for a number of months and are considering which conditions are likely to be discharged on road opening and which will need to be delinked.’

Fortunately, ESCC is its own planning authority, so getting the conditions ‘negotiated out, waived or reassigned’ must have been easy enough. But why should there be one law for the county council, and another law for everyone else? What is the point of having planning conditions if a local authority can disregard them at will?

‘Compensation events’
A compensation event is an issue such as a construction site problem which require the client – in this case, ESCC – to pay more money to the contractor (in this case, a joint venture (JV) between Vinci and Hochtief) than originally agreed. According to this document, there is a large difference – in fact, £12m – between ESCC and the contractors about how much compensation should be paid, and ‘further compensation events are likely’. We don’t know whether these differences have been resolved, and how much has been paid – what we do know is that the cost of the road has risen by ‘only’ £4.7m since this document was written (£3.4m in March 2016, and £1.3m in January 2017), so it would seem to be very likely that we have yet to see the end of the cost increases.

‘Reputation issues’
The report states that there is an ‘ambiguity’ around responsibilities for the road scheme, and suggests that a commercial Project Director is needed ‘to increase senior level pressure on the JV’. It lists problem issues including ‘contractor delivery, cost overruns, compensation events and discharge of planning conditions’ and notes that:

‘These are reputation issues for both ESCC and the JV which require handling at a senior level’.

Interestingly, in the redacted version of that last sentence, the words ‘both’ and ‘and the JV’ had been blacked out, so the sentence reads ‘These are reputation issues for … ESCC … which require handling at a senior level’.

Guidance from the Information Commissioner’s Office on exemptions allowed by the FoI Act states that ‘Information should be disclosed if the only likely harm would be embarrassment to the authority‘ (italics added). It seems pretty clear that this section was originally redacted precisely because it was embarrassing.

Risk Management
Risks are graded on a RAG (red/amber/green) scale, and the report states that the risk register for the project contains only one red risk, that of unexpected archaeological finds. However, it goes on to suggest that perhaps the risk recording (ie only recording one red risk) was inaccurate:

‘Given the project has no agreed programme, is facing increasing costs, and significant compensation events are being made, the Project Board need to revisit the approach to risk management and risk recording.’

‘In the next phase, attention turns to benefits realisation both in terms of the road itself and the wider economic, transport and environmental benefits…Gate 5 benefits realisation and operational delivery would be after the post project monitoring and evaluation, approximately a year after opening’.

In fact, according to Project Manager Bob Pape, the one year on report will not be available until next autumn – that is, almost two years on. This is because, he says, the timescale is dictated by the availability of accident and air quality data covering the period in question. Presumably this data was available very shortly after the one year anniversary of the road opening, so why it will take almost an extra year to produce thes report, is not clear. We would expect ESCC to want to let us know about the benefits (£1bn into the local economy and 3,000 jobs, according to them) as soon as possible. However, as with this report, we may find that ESCC would rather we all averted our eyes.