Behind the scenes at the Link Road. Hastings Online Times, 18 January 2017 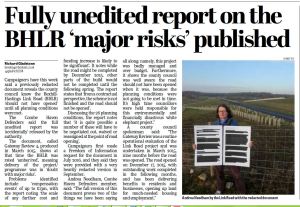 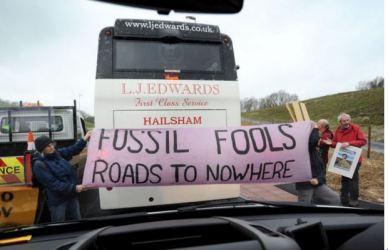 Will road bid go back to court?  Hastings Observer, 9 October 2015

Defending Hollington Valley? Don’t even think of talking to the man who’s destroying it  Ecologist, 20 July 2015

Controversial link road still not complete – with no date set to open  ITV Meridian, 19 May 2015 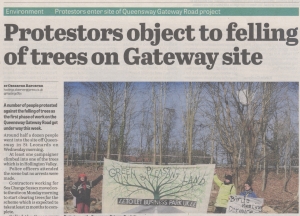 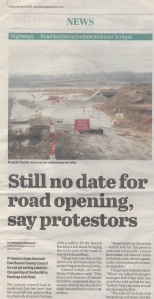 So when will the Link Road be ready?  Bexhill Observer, 16 January 2015

Link Road will not open on time, Bexhill Observer, 5 December 2014 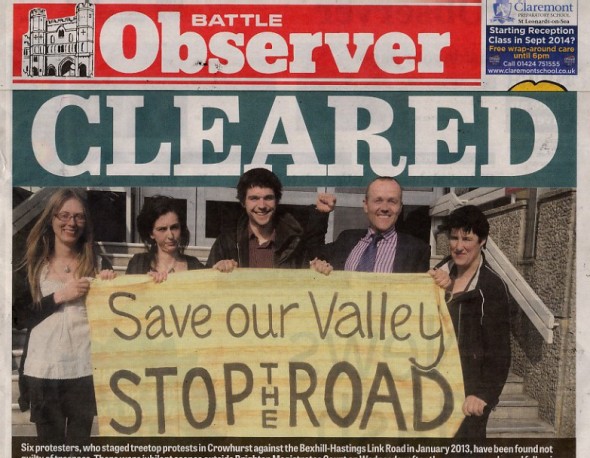 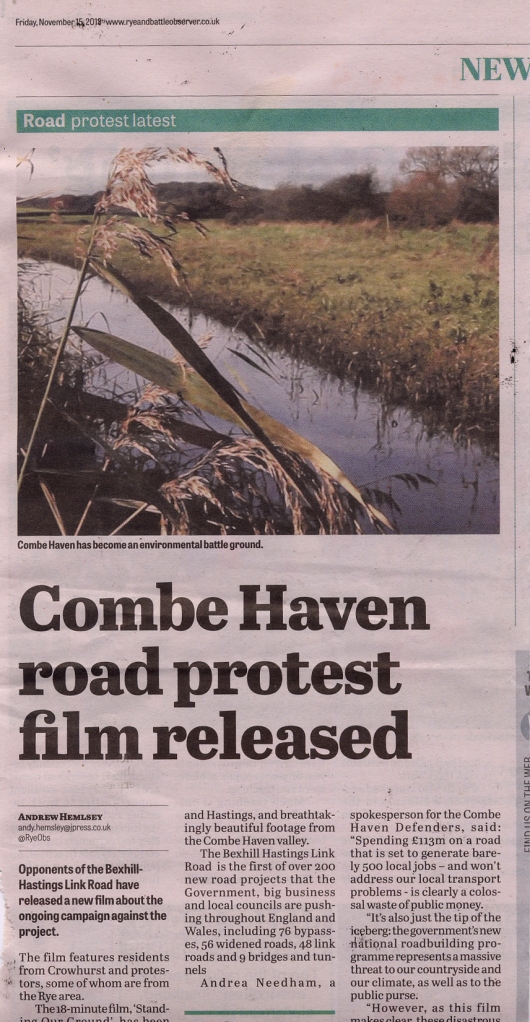 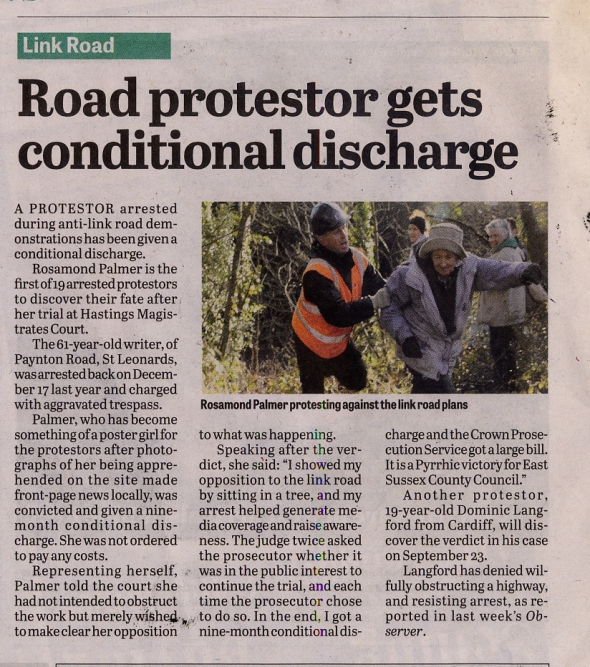 Link Road will cause gridlock say protestors, Battle Observer, 24 May 2013

Released Information, Hastings Observer, 10 May 2013 [editorial: “what is revealed is that plans were rushed through without proper thought … One would have thought the DfT would have nothing to hide from the public when making recommendations to ministers on whether or not to fund such a major project, however now it becomes clear that uncertainties are what they were trying to hide.”]

George Osborne digs himself a hole: ‘Uneconomical’ roads to get go-ahead, Independent on Sunday, 6 May 2013 (Mostly about the BHLR, which is cited as a ‘vivid example’ of George Osborne’s ‘pushing ahead with a massive nationwide road-building programme despite high-level concerns from ministers and Department for Transport (DfT) officials that there is little evidence it will boost the economy.’ Quite a bit about the (formerly) secret Link Road docs.)

Trees of Combe Haven return from the grave,  Ecologist, 13 February 2013

The battle against the bulldozers goes on, says Hynde’s daughter  Independent, 4 February 2013

The moment Chrissie Hynde’s daughter was arrested at ‘Battle of Hastings’ protest camp after bailiffs cut her down from treehouse, Daily Mail, 29 January 2013

Bexhill road protest is about putting the environment on the right side of the ledger, Guardian.co.uk, 25 January 2013 [Environment blog piece by John Sauven, executive director of Greenpeace UK]

From the local Observer newspapers, 25 January 2013: 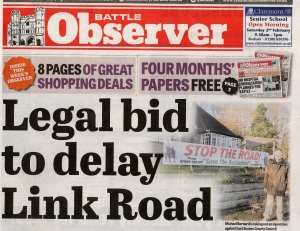 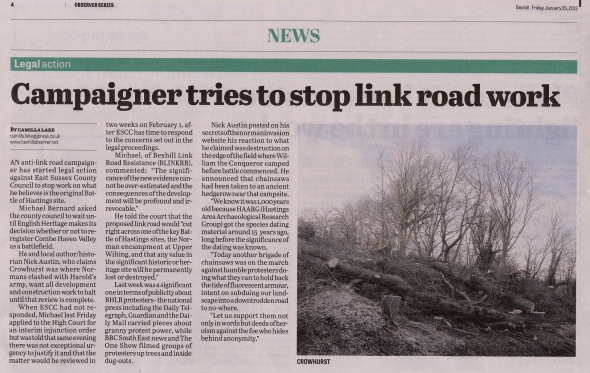 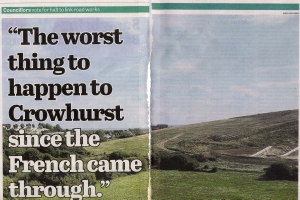 Bexhill road protest is about putting the environment on the right side of the ledger, Guardian.co.uk, 25 January 2014 [Guardian environment blog by John Sauven, Executive Director, Greenpeace UK]

‘They have got more manpower, but we have got guerilla tactics’, Times, 23 January 2013 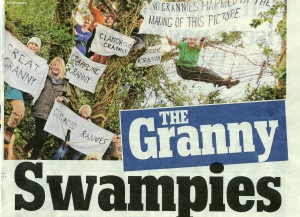 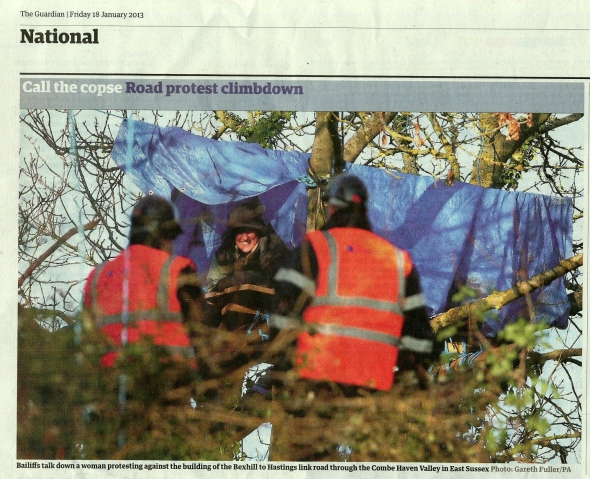 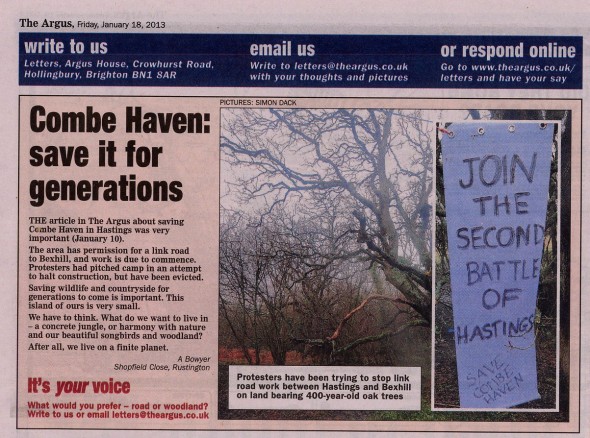 Hastings to Bexhill link road protesters say they will be back following eviction, The Argus, 18 January 2013

Bailiffs clear all protesters from Hastings link road site, This is Sussex, 17 January 2013

Why I chose to join the fight against the link road, Campaign for Better Transport, 14 January 2013

The running battle brewing in 1066 country, Daily Telegraph, 14 January 2013 [Comment piece by former Telegraph editor Charles Moore: “As I write, angry grandmothers are tying themselves up in the branches of trees, attempting to prevent the advance guard of chainsaws which precede the Norman cavalry, otherwise known as the road-builders. Combe Haven valley is just inland from Bulverhythe. If Mr Austin and Mr Grehan are right, that William did, indeed, land at Bulverhythe and camped at Upper Wilting Farm on the hill above, then the new road threatens the Norman site. If Mr Austin is correct, that the battle took place at Crowhurst, then the entire site from coast to village becomes semi-sacred. The anti-link campaigners would then be able to stop the road, at least until everything had been properly excavated.”]

The new weapon in the battle for Hastings: the granny tree, Daily Telegraph, 12 January 2013 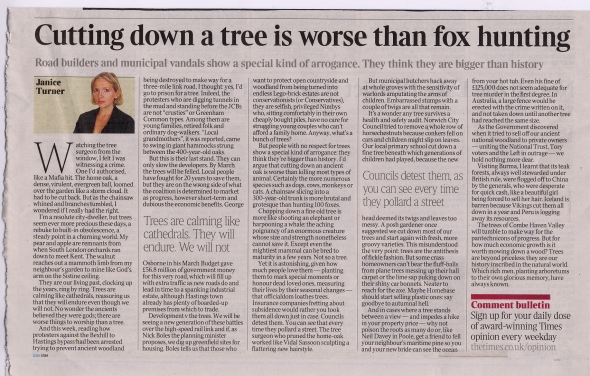 Cutting down a tree is worse than fox hunting, Times, 12 January 2013 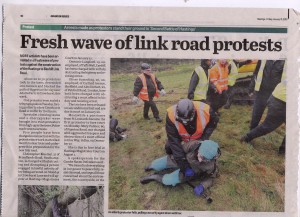 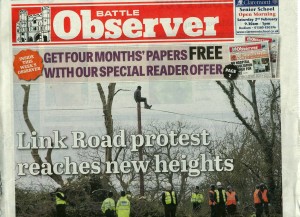 Link Road protest reaches new heights, Battle Observer, 11 January 2013 [NB This piece uncritically reproduces the police claims that: (a) they were forced to shut the road (they weren’t); and (b) makes unfounded assertions about the employment status of those arrested.]

BBC Today programme, BBC Radio 4, 10 January 2013. Two five min slots: “Roger Harrabin with the new swampies” [starts around 7.21am]; and debate between the Campaign for Better Transport’s Stephen Joseph and Adam Marshall from the British Chambers of Commerce [starts around 8.42am]. Should be available on to “listen again” to for several days through this link: http://news.bbc.co.uk/today/hi/listen_again/default.stm

Road scheme protesters ‘to lose’, BBC News, 10 January 2013.Wide-ranging piece with an unfortunate title. Among other things, BBC Environment Analyst Roger Harrabin highlights the redacted DfT recommendations, and challenges ESCC leader Peter Jones’ fast-and-loose approach to the figures for jobs that will allegedly be generated by the Road.

Back to work on the BHLR, Hastings Online Times, 9 January 2013

Protestor up telegraph pole closes road, Hastings Observer, 9 January 2013 [Note: The claims about the arrestees employment status appear to originate with the police. In our experience the police label anyone who refuses to disclose their employment status to the police – which the latter have no right to demand – as “unemployed”. Likewise, the police appear to have closed the road to cause disruption which they could then blame on protesters, as the pole was reportedly well away from the road.]

Road protesters go below ground in the ‘second battle of Hastings’, Guardian, 7 January 2013

The battle for Combe Haven The Ecologist, 4 January 2013